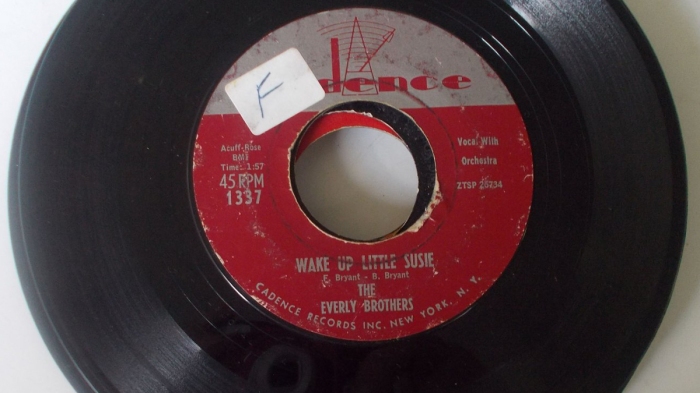 Because my father is about the only person who checks this blog, and because Father’s Day passed recently, I’ve created this list of five songs that remind me of him:

“Feed Jake” – Pirates of the Mississippi

The video for this song came on CMT every morning around the same time, and my dad and I would sit on the edge of my parents’ bed and watch it every time. I think I learned a lot from that song. Years later, I have two dogs and I think my dad was probably a little disappointed neither is named Jake.

“Not Fade Away” – Buddy Holly

Buddy Holly was one of the first musicians I really loved, and I still do. My dad would often play the Buddy Holly Lives greatest hits tape in the car. It is this song in particular that makes me think of him because he loves the use of it in the movie “Christine.” It’s a great scene (and a great song).

I’m a morning person and an early riser, and I have my father to thank. I had no choice growing up. If I tried to sleep in as a kid, my father had his ways to try to wake me up. First he’d talk, laugh or sing loudly. Then he’d clean the hallway hitting the door with vacuum repeatedly. Then he’d need to get something from the closet in my room. If all that failed to get me out of bed, he’d just pull on my toes and sing “Wake up, little Mikey” to the tune of this song. It still haunts me.

I’ve watched the movie “Hoosiers” more than any other because my father who wishes he was Coach Norman Dale and I was Jimmy Chitwood. But I’ve also seen “Little Shop of Horrors” countless times — probably because his crush on Ellen Greene. And he owned the soundtrack on cassette. In particular, he especially this song for when Audrey comes out of her shell and belts out the chorus. Personally, I prefer Rick Moranis.

My dad (and me, as well) has the habit of singing along to song despite not knowing the words. Though he’s a good singer, maybe he doesn’t have the best lyrical memory, so he’ll just mumble along to the tune until a line he knows that he belts out. He also tends to sing the same line from a song over and over and over until it gets annoying. (I do this, too, thanks to him.)

With that said, perhaps no song makes me think of my father more than this one. It would often come on the radio when we were driving around North Central West Virginia in search of baseball cards or Starting Lineups. Neither of us knew 90% of the words, but we definitely knew the opening line of one of the second verse, and we’d sing it at the top of our lungs. I love you, dad.

“Flowers on the Wall” – The Statler Brothers

One thought on “5 Songs That Remind Me of My Father”